Sallie Alcorn was elected to Houston City Council in December 2019. As an at-large council member, she works on broad policy issues – city finances, public safety, flood mitigation, transportation, mobility, infrastructure, environment, and parks and greenspace. Sallie launched the city’s first budget survey, YOUR TWO CENTS in 2020, aimed at increasing resident engagement and input in the city’s budgeting process. Through her role as the chair of the Regulatory and Neighborhood Affairs Committee, Sallie has also been heavily engaged in neighborhood issues, leading the charge to revise the City of Houston’s animal welfare and noise ordinances. Further, she has continued to work towards improving and streamlining processes at city permitting. Sallie represents the city on regional issues as a board member of the Houston-Galveston Area Council and an alternate on the region’s Transportation Policy Council.

Prior to running for office, Sallie was a longtime City Hall staffer. She served two council members as chief of staff and worked in the city’s flood recovery office. As chief of staff to the chair of the budget and fiscal affairs committee, Sallie learned to navigate the city’s $5 billion budget. She helped develop the city’s comprehensive financial policies and orchestrated five years of budget hearings. She was heavily involved in initial Harvey recovery efforts and obtained grant funding to advance green stormwater infrastructure initiatives. She assembled and managed a task force to tackle redevelopment and flooding policies, worked with council members to identify neighborhood drainage projects, and led the charge to bring Houston’s Adopt-A-Drain Program to life.

Sallie has a long history of serving her community. She has worked with offenders as a volunteer facilitator for Bridges to Life, a restorative justice prison program aimed at reducing recidivism rates. She is on the advisory board of the San Jose Clinic and the Houst 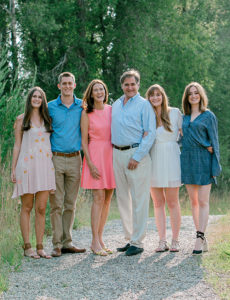 on Maritime Center and Museum and has previously served on the boards of Holocaust Museum Houston and the Houston READ Commission. Sallie has chaired events and raised funds for the Holocaust Museum, the Women’s Fund, the Children’s Museum, the READ Commission, and the Contemporary Arts Museum. She also served for many years as a parent volunteer at her children’s schools. Sallie is a longtime member of St. Michael the Archangel Catholic Church.

Sallie and her husband George have been married 34 years and have four grown children.